The court may be our classroom, but what we teach is Bigger Than Basketball.
We are a team of community partners, coaches, mentors, and students of the game with a passion for developing both the player and the person. From boys to girls, rookies to vets, all athletes are welcome, just so long as they come ready to work. That's not to say there's no play in what we do, we just believe character is best built through competition.
At the core of our game-plan, we teach teamwork along with the physical and mental skills needed to be the best teammate possible—laying the groundwork for success both on and off the court for seasons to come.

The San Antonio Spurs launches the Spurs Inclusive Sports League! This new league was created in partnership with Spurs Give, Spurs Sports Academy, Morgan’s Wonderland, and with guidance from Special Olympics of South Texas.

Spurs Inclusive Sports League provides sports training to young athletes of all abilities while creating an inclusive community where they can play a sport they love, improve their skills and make memories. The inaugural basketball season begins December 4, when players will be placed on teams to make up the new league. Starting in January, games will take place every Saturday at Morgan’s Wonderland Sports. This season will include 60 young athletes ages 9-14, with and without intellectual disabilities. Spurs Sports Academy coaches will lead the six teams. 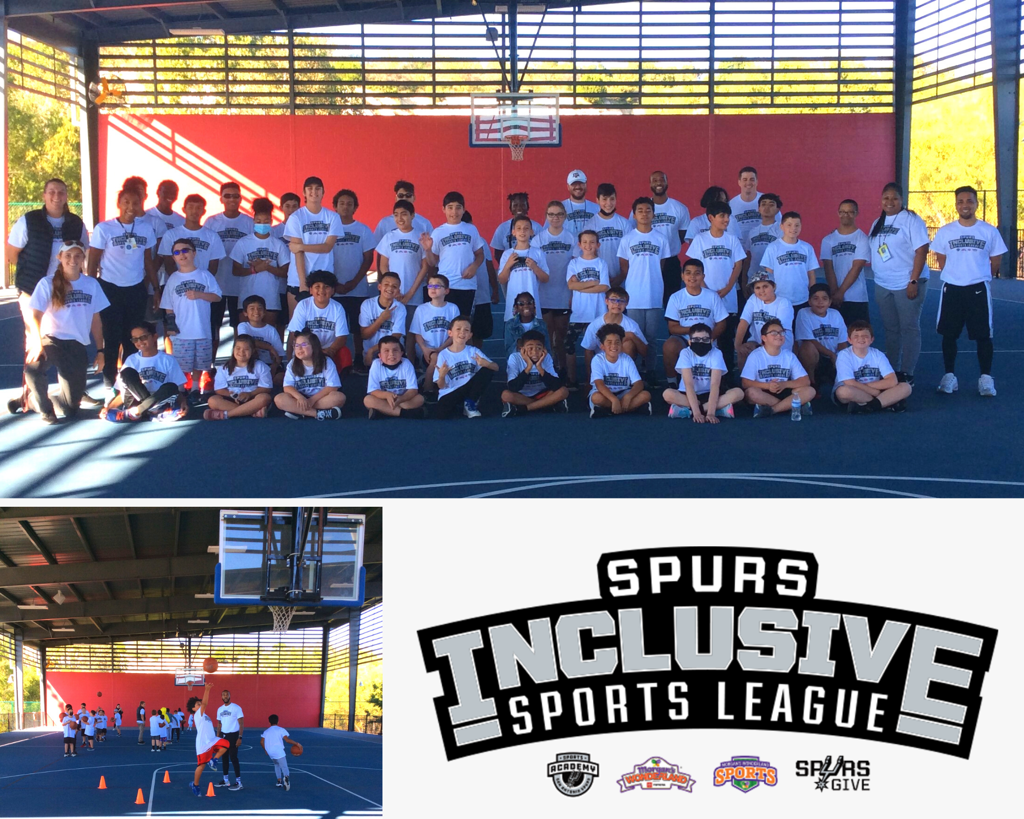 Back to Basketball Youth Clinic

Spurs Sports Academy & Austin Spurs are excited to present the Back to Basketball Virtual Clinic! This free “Back to Basketball” Youth Clinic is a G League-wide event celebrating the return of basketball. It included a 45-minute clinic, focusing on individual skill development, the importance of fundamentals, and the development of a healthy attitude. Along, with special guest appearances from coaches of Spurs Sports Academy and the # 1 NBA Mascot, the Coyote!

Spurs Give and the City of San Antonio today announced the renovation of a basketball court at West End Park. West End Park court reopened to the community today featuring a resurfaced Spurs Give court with new backboards and hoops sponsored by Coca-Cola and sporting the Sprite logo.

“This project is special to us because it gives children in our community one more safe place to learn, grow and be active in their own neighborhood,” said Bobby Perez, Chief Legal Officer and General Council for Spurs Sports and Entertainment. We are also so thankful to the Parks and Recreation Department for their partnership to make this program a reality.”

In 2020, the city’s Parks and Recreation Department and Spurs Give teamed up to form the Play SA initiative and committed $1 million to renovate 40 parks across San Antonio’s 10 districts. Future renovations will range from revamped basketball courts to skate parks to upgraded playgrounds and parks most in need will be selected for the program.

“We’re thankful to Spurs Give for their support. With their donation, we were able to provide enhancements to five basketball courts in our community. These revamped courts look great and show our community’s pride for our parks and our Spurs,” said Homer Garcia, Director of San Antonio Parks and Recreation. “We look forward to our continued partnership with Spurs Give and future enhancements to neighborhood parks.”